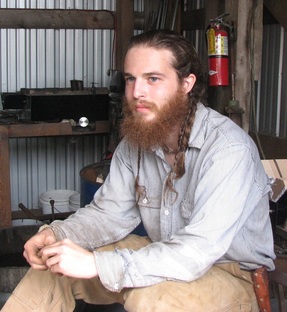 I started working as an apprentice in 2009. I had already had experience in making wooden paddles, deer calls, paintings and other things. I started leather working while doing my apprenticeship with Jake to sheath the knives we made. I started making quivers, gun holsters, and leather armor for our reenactments after becoming more involved in Jake's viking group. 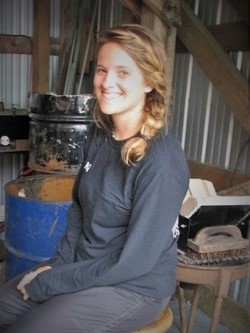 I was working with the Alaska Rainforest Sanctuary when I met Jake. I started talking to him after work and he suggested that I become an apprentice because he thought I would enjoy it. My old boss in North Carolina was teaching himself blacksmithing so I was exposed to it in small doses back then and thought it would be interesting to learn more. I'm not a patience person and I've learned that sometimes you're going to mess up or take a little longer and that's okay. I love that this is such a masculine thing and I'm back there smashing metal with a hammer, especially when no one else is around and I'm the only one at the forge. 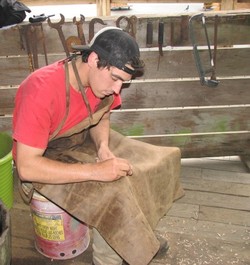 I'm originally from Virgina, but was visiting Ketchikan during the summer. I had always been interested in hand building, taking something from scratch and changing it completely into something useful. I did some wielding and blacksmithing at my community college, but nothing nearly as intense as what I've done with Jake. I've designed my own hooks, made a knife, and done some leather work so far. I really enjoy the heat of the fire and all the hard work. If you're not getting a small burn here or there, then you're probably not doing it right.